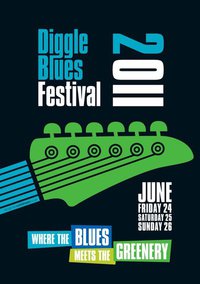 Living Bluesman Tom Attah has been confirmed for the 2nd annual Diggle Blues Festival.  The blues shakedown begins on Friday 24th June 2011 with a series of free blues gigs taking place at venues around the village until Sunday 26th.

Three venues are holding concerts; the Diggle Hotel, the Hanging  Gate and the Diggle Band Club. There is one show at each venue on the Friday, Saturday and Sunday, each taking place at different times so avid blues fans can attend every gig if they want.

Tom is performing his acoustic show at 4pm on the 25th at the Diggle Hotel – before heading off to the B.B. King show in Manchester and then travelling to South for his debut appearance at this year’s Glastonbury Festival.

Other acts on this years’s bill include ALEX McKOWN, the JUNKHOUSE DOG BLUES BAND, YES SIR  and THE 2:19 BLUES BAND.  Check the Diggle Blues Festival Facebook Page for more details.