I am pleased and proud to announce that I will be supporting blues giant KIRK FLETCHER on the October 23rd date of his UK tour. 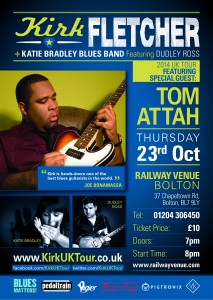 Widely considered one of the best blues guitarists in the world, Kirk Fletcher has commanded the respect and acclaim of critics, peers and fans across the globe. He is a four-time Blues Music Award nominee and has played with a variety of popular artists, including a four-year role as lead guitarist of The Fabulous Thunderbirds. He is also the frontman of his own band, having released three studio albums. A live album and a fourth studio album are currently in the works.

Joining Kirk on his UK tour will be other, contemporary blues heavyweights including Katie Bradley, Dudley Ross, Vince Lee, TJ Norton and many, many others.

Kirk will also be appearing on the Paul Jones Rhythm & Blues show and performing a session live from BBC Maida Vale.   For more information, tickets and to get involved, please check out the tour’s Facebook page: https://www.facebook.com/kirkuktour.